"It is one thing to move away from your home country for the first time and live in many ways in a society that operates so differently from what you know and have grown up with. But to my surprise the real identity crisis came when my curiosity led to a career change."

From sunny South Africa, my name is Tshepiso. I arrived in Sweden to study for a Master's in Water Resource Engineering in 2017. During my time while studying I found myself whisked away by the entrepreneurship ecosystem and that’s when everything changed. 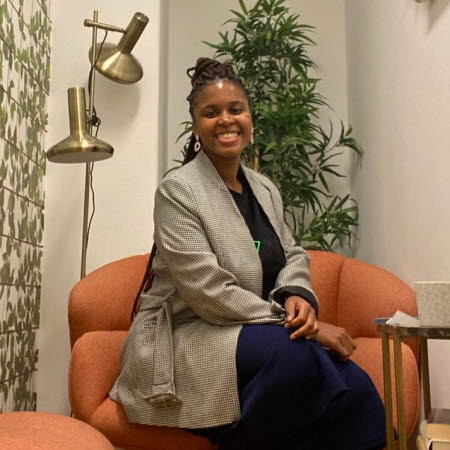 While studying at Lund University I joined Venture Lab which is a startup incubator for students. Being inspired by other students building their own businesses, I decided to give it a shot. What followed was a journey worth more than money. I learnt about innovation,I was recognised in Sweden as one of the 101 inspirational young entrepreneurs, I developed practical skills that demonstrated my ability to take initiative and be creative but most importantly - and I didn’t notice it at the time, I was building a network.

After my studies it was someone from my network that reached out to me about a part time job as a project manager for Pink Programming. It was then that tech became something tangible to me. I did not know much about the tech industry before coming to Sweden. If there is one country where innovation and tech can be explored without barriers - it’s Sweden.

My job was to plan and coordinate a course where people who identified as women and non-binary, with no coding experience would learn how to code and be prepared to take on roles as junior developers. Having met the candidates, read their backgrounds and then see them learning to code and find fulfilling jobs as developers, I knew I could do it as well. Once again I kept growing my network.

It didn’t happen immediately because other obligations in life required me to have a job and so I could not dedicate time to it, but after having to look for a job yet again when my contract did not continue, I was tired of not working in the role I really wanted to be. So I took a risk and stopped job hunting and joined a bootcamp to focus on coding. Having a supportive partner also helped.

While I was at Pink Programming, I remember the one advice the students kept getting was that they should start applying for jobs even before they were done with the course. With a tech and startup filled network, I started to do just that. By the time I finished the course I had some interviews lined up and within a few weeks - I got an offer.

Learning to code was challenging and navigating the job market in Sweden isn’t the easiest, but my biggest challenge was giving myself the permission to explore beyond my formal education. Careers aren’t one way - they are journeys that adapt over time.