"The following years brought different feelings to the surface and I started to develop this HATE-LOVE relationship with Sweden and the Swedish language. I expected to learn Swedish quickly, as I knew German and later even English and everybody was saying that learning Swedish would be a piece of cake. I started struggling with the darkness in the winters and I hated the lack of real spring ..." 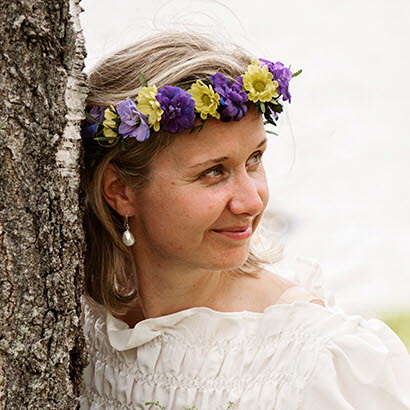 From Germany (to Australia) … northern Sweden … and back south

I’m originally from Poland, where I was born and where I lived until I was 21 years old. However, due to a traumatic childhood and adolescence, combined with ever present religious hypocriticism in my home village, I never really felt at home. To add salt to the wound, my father actually had an Ukrainian background due to Operation Vistula in the aftermath of World War 2.

To date, sadly my relationship with Poland is tricky, and certain political decisions like last’s years abortion law isn’t making it easier for me.

So, I lived for 6 years in Berlin, Germany. I not only learned German, perfected my accent, but I also obtained a Bachelor in biology. Next, I planned to continue with Master studies in molecular biology. Sounds good, right? There was only one problem - I did not speak any English at that time, and English was required for Master studies. I thought, no problem - I will learn English while working and
traveling in Australia ….. a dream of mine.

Long story short, Australia became the North of Sweden. In September 2010, right after I finished my studies in Berlin, I arrived in this little tiny town far far in northern Sweden - Umeå. What did I know of Sweden before? Vikings, Stockholm, Lapland and in particular Deluge from history classes in elementary school but I never heard of Umeå. My goal in Umeå was clear: to learn English during a 6 month internship at Sveriges Landburkuniversität (SLU) and to get to know what scientific work looks like.

The "exotic" Umeå and northern Sweden

Upon my arrival in Umeå I felt like I arrived in the winter wonderland with extreme frosts (up to -30℃), a lot of white and beautiful snow that glittered day and night and dancing auroras in the night skies. It was magic, still is. I felt amazed, astonished and often surprised.

I remember my first trip to Umeå downtown. Well, I feel embarrassed to mention it now but while walking, I was actually looking for the underground railway……. Yeah….. you can laugh now. Of course, Umeå has public transport, which includes buses, however Umeå’s downtown is actually only 30 min walking distance from the campus. Once downtown, after taking a few turns, there was one small shopping mall, few business shops, few restaurants and cafes, the city hall and that’s it. Remember, that was a decade ago, so nowadays Umeå has grown a lot. However, I didn't even know how much I needed to be in this tiny town after living in Berlin - Germany's busiest metropolis.

That year (2010) the snow fell already in October making darkness lighter with sparkle and coziness. The winter days were extremely short, having only about 4 hours of daylight on sunny days. Of course, I had administrative issues/problems like every new arrival international has in Sweden, such as personal number. Without one you do not exist in Sweden and everything is connected to it, not to mention the struggle to rent an apartment as an International. Nevertheless, I received a lot of help and support with all of it. It was amazing to have met so many friendly and extremely patient people, both Swedes and Internationals, who were helping me with the administration and the English. I remember the exhaustion when I was trying to say something in English and I was so incredibly impressed by the English the Swedish people speak. Little did I know, it's going to be this difficult to learn Swedish because of that, but my first year was just great.

Living in Sweden and working in academia

Because I got the opportunity to do a Masters followed by a PhD in Umeå, I cancelled my admission to Master studies in Heidelberg in Germany to stay a "little" longer in Umeå. So, 6 months became 10 years. I did not think of settling in Sweden for a long time, therefore learning Swedish was not a priority.

The following years brought different feelings to the surface and I started to develop this HATE-LOVE relationship with Sweden and the Swedish language. I expected to learn Swedish quickly, as I knew German and later even English and everybody was saying that learning Swedish would be a piece of cake.

I started struggling with the darkness in the winters and I hated the lack of real spring (as one knows it from continental climate). Summers were too cold (how often did I bike in Umeå with cotton gloves in mid June) and too short. It felt like for 6 month the human body is adjusting to the long days and white nights (so fascinating the first year) and for another six months it fights with tiredness and darkness. It became even worse, when I became a mother and had to entertain my two little kids (under two years old) spending time in a wet and cold sandbox for a half a year. That sandbox would disappear under snow and ice for the other half. Luckily, the kids do not care, which is amazing! Later, I started cross country skiing and hiking as a balance - that helped.

It quickly became obvious why 90% of the population live south and I started wondering why those 10% of the Swedish population would still want to live in the north? But, if you are born and raised there, you have roots and family, you are home and I truly envy that. I have to say, in the meantime, I appreciate northern Sweden, the nature, the calmness and wilderness, even the darkness and of course white nights. I never stopped missing the real springs and vicinity to my close friends. Traveling from Umeå anywhere other than Stockholm is tiring and expensive!

Furthermore, my PhD finished unfortunately not on a great note causing mental health problems and reduction in my self-confidence. The recovery was slow. Likely, after my Phd, I managed biomedical research studies in their early stages at Umeå Biotech Incubator. That experience in a "real" Swedish working environment in contrast to academia, was needed and I enjoyed it to the fullest until we moved to Skåne.

During my first 5 years in Sweden I was studying English by myself and I planned moving back to Germany, where I left my heart before I arrived in Sweden. However, after living in Sweden for this long, having children and getting under the skin of Swedish culture, although still not speaking Swedish (at least me, my "sambo" did), we decided we like it here a lot. In any case, we share a lot of values with Swedes, no country is perfect though. I regret, I never studied Swedish the way I learned German, e.g. in classes for several months. However, once my first born started daycare, there was no way I wouldn’t understand my child or be able to communicate with the teachers or doctors and nurses. Whether in Germany or Sweden, I still feel it is my duty to learn the spoken language, simply out of respect for the people and to feel truly integrated. Today, I finally can communicate in Swedish. It’s far from perfect and it still requires a lot of effort, but I can read, write, understand and speak. I even started speaking Swedish with one of my Swedish friends, with whom previously I would only speak English.

Moving to South of Sweden

My sambo received this great opportunity to build up the south office for the Umeå company he has been working for, so we took this chance and planned to move to Skåne in April 2020. Little we knew, how much the pandemic will take over the world. Nobody knew. Nevertheless, I was convinced I will find a job quickly here in the south of Sweden - the Life science Hub. However, because of the pandemic and a combination of my shy nature, my weak Swedish and the new "skånska" dialect - in some ways it felt like moving to a new country. The struggle became real. It's been a tough year, not only because of the pandemic but mostly because I lost myself in the job search, I forgot who I am and what I can offer.

ICHL and the Kick-Start Program

I’m proud to say, I recently participated in the Kick-Start Program (KSP) for internationals organized by International Citizen Hub Lund (ICHL). I am deeply thankful that I was accepted as ‘recently moved to Skåne’ just like any other International.

At first, I thought, what can I possibly learn more about writing CV and cover letters or about the Swedish labor market. After all, I already spent countless hours with a job coach.

Boy was I wrong! Besides learning about the STAR approach to interviews, it also helped me get out of my comfort zone and meet people, like in person, since the program offered that. After many lonely months of job searching, zoom workshops and webinars at the kitchen table, I was eager to meet and to talk to people, other than my "sambo" - and husband since last summer, who is lovely but I do need to see other people.

The program made me realize one important thing I forgot about myself, who am I? No matter how many years I am in Sweden (or anywhere else for that matter) and despite Swedish citizenship even - I am an International - and I will stay ONE and that is a good thing.